What's goin...
How the warm Arctic relates to the extreme cold experienced by the U.S ...

Scientists get a close look at the changing Arctic

As the Arctic Ocean begins to freeze for the winter...

The objective of the flights was met by successfully making measurements of the ocean, and of the atmosphere over open water, first year ice, and multi-year ice, under a variety of weather conditions, during the freezeup.

From the first flight of the mission, the science team was intrigued by a number of phenomena seen in the ocean, at times only 200 feet below, or detected in the atmosphere by instruments aboard this highly capable research aircraft. One immediate observation is the near absence of oln times past thick multiyear sea ice was commonly found here. Scientists were surprised by the abruptness of the transition from 80-90% ice coverage to completely opeder and thicker sea ice in the region. So far only a few small fragments of second-year sea ice have been spotted over hundreds of miles of low-altitude survey, whereas in water.

From an atmospheric standpoint, the magnitude of the vertical wind shear (in both speed and direction) above a shallow layer of low-level winds from the northeast was striking. It will be interesting to see if state-of-the-art numerical weather prediction models are able to replicate this structure. It was also evident that the atmosphere is quite sensitive to the nature of the underlying surface, with different vertical profiles in the temperatures and winds over open water, new and wet sea ice, and older and colder sea ice.

Further analyses of the data collected in these flights over the Arctic will be required to quantify the physics of interactions between the air, sea ice and open water, with the goal of understanding how recent reductions in sea ice extent in autumn will impact weather patterns regionally and perhaps farther afield.

From October 21 through November 6, 2013, NOAA and University of Washington scientists used a heavily-instrumented NOAA WP-3D Orion research aircraft  flying out of Eielson Air Force Base in Fairbanks, Alaska, to quantify the air-sea-ice interactions and lower atmospheric structure in the Arctic marginal ice zone of the Chukchi and Beaufort Seas. The ultimate goal is to infer how recent reductions in sea ice extent in autumn will impact weather patterns regionally and perhaps farther afield. This is the first time we are measuring and documenting how rapidly, and in what manner, sea ice advanced in the fall over the Chukchi Sea.

The NOAA aircraft is equipped with more sensors than a fleet of satellites, so the science team is able to collect a wide range of data, from deep in the ocean using air-deployed oceanographic probes, to flight-level observations of ocean temperature, sea ice and solar heating, to above the clouds where “dropsonde” sensors are dropped in order to characterize the structure of the atmosphere below. At times the team may deploy an atmosphere or ocean probe every six minutes in order gain a thorough understanding of the physical environment around the aircraft.

This mission is being led by Dr. Jim Overland, of NOAA's Pacific Marine Environmental Laboratory, along with scientists from the Joint Institute for the Study of the Atmosphere and Ocean at the University of Washington. The WP-3D Orion aircraft, better known as a Hurricane Hunter, is based at the NOAA Aircraft Operations Center in Tampa, Florida. To learn more about NOAA's research in the Arctic, visit http://www.arctic.noaa.gov/.

Support for this effort is provided by the Office of Naval Research (ONR). 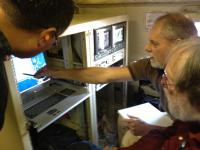 Inspecting data from instruments aboard the P3 aircraft.