Because of the trend in reduction of ice cover in the Arctic and the possibility of permanent loss in seasonal ice cover in the Chukchi Sea study region as shown by climate models, it is thought that this area might be subject to significant ecosystem change. A program of ecosystem-oriented exploration was planned for Leg 2 of the RUSALCA expedition to provide a foundation for detecting future ecosystem indicators of climate change.

Twelve different scientific programs examined Benthic processes, a Census of Arctic zooplankton, biodiversity of adult and juvenile fish, nutrient and primary productivity, marine Chemistry, physical oceanography, microbial reactions and fluxes, side-looking sonar and video imagery of the seafloor, paleoceanography and atmospheric contaminants. The primary study area lay between Wrangel Island and Herald Canyon in Russia Federation territorial waters to Cape Lisburne, in Alaska, USA to Point Barrow USA and south to the Bering Strait A series of hydrographic transects were taken to allow sampling of all water masses during this summer period. A high priority of the hydrographic survey was to collect samples across Bering Strait in support of the Russian and American moorings places in the Western Bering Strait, to collect a series of high-speed CTD transects across Herald Canyon and to enhance the knowledge of faunal distributions for the Arctic census of marine life. The long-term goal in this region is to obtain continuous and comprehensive monitoring within the Bering Strait for several years, which will require routine access to the eastern and western portions of the study area for scientific operations.

High-density CTD stations also examined the role, rates and rhythms of Pacific water transport through the Herald Canyon and analyzed the dispersion of this water into the greater-high Arctic beyond. Until recently, the transport pathways of water into and out of this region have been only poorly mapped. The degree that these waters mix with newly invasive Atlantic waters over the Chukchi Plateau and the Mendeleev and Canada Basins is also not well known. Understanding these physical and consequent nutrient pathways is critical for mapping the distribution of biota and its migration routes through this region of the Arctic.

The following is a list of samples taken during Leg 2:77 CTD and nutrient casts were taken, two moorings (both Russian and U.S.) were placed in the western waters of the Bering Strait, 87 phytoplankton samples were taken, a comprehensive survey and census of zooplankton species was carried out at 33 stations in the Bering Strait through the central Chukchi Sea, benthic grabs were taken at 11 stations, benthic epifauna were sampled at 17 stations, larval and juvenile fish were collected at 17 sites,31 species of fish were sampled, 27 trawls for adult fish were carried out, collecting 24 species, and eleven remotely operated Video lowerings were carried out from the Bering Strait into the Herald Canyon,

During Leg 2, of the RUSALCA expedition, the hydrographic, biochemical and productivity sampling was integrated from all stations sampled and the data from U.S. and Russian collaborators will be combined for the joint assessment of climate change, water mass properties and a census of marine life in the Arctic(right). 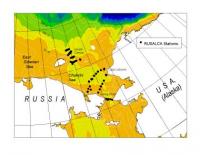 High density CTD stations on RUSALCA 2004 Leg 2, monitoring Pacific water transport through the Herald Canyon and dispersion of this water into the greater-high Arctic beyond.