The Danish Meteorological Institute (DMI) compiled these maps showing the distribution of Arctic sea ice based on reports sent to the institute from ship captains and observers on land. The maps were published annually in the Nautisk-Meteorologisk Aarbog (Nautical Meteorological Annual). The digital images here were provided by the Icelandic Meteorological Office.

An annotated guide to thousands of the most significant records pertaining to Alaska held by the U.S. National Archives, including those of the Revenue Cutter Service and the Coast Guard.

This edition of the Coast Pilot contains a bibliography of 3,822 titles and subtitles in 11 languages relating to the exploration of the North Pacific – Arctic region. It is claimed to be the first publication in the United States to use cyrillic type.

This bibliography contains 5958 titles dealing with exploration, geography, and scientific research in the polar regions through the third quarter of the 19th century.

The Brooks and ICES (International Council for the Exploration of the Sea) bibliographies are among the best resources on the scientific literature dealing with the early 20th century climate fluctuation in the Atlantic sector of the Arctic and its environmental impacts.

This atlas contains a bibliography of 1700 publications. 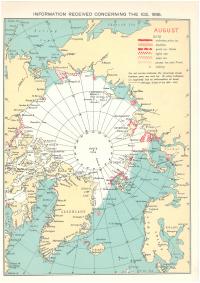