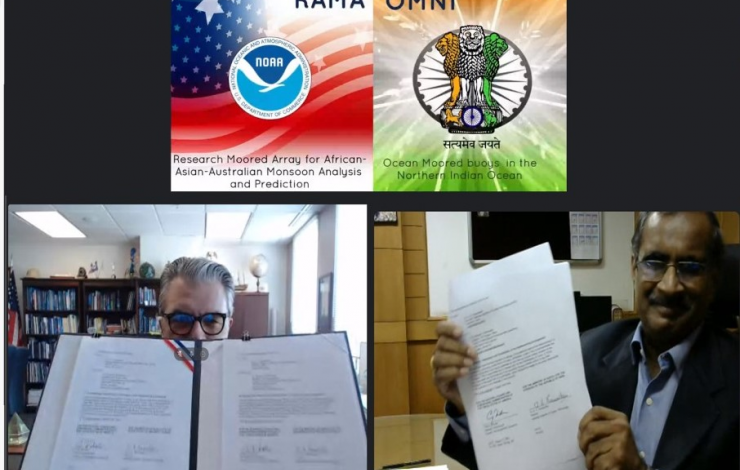 Craig McLean and G. A. Ramadass hold up their signed partnership agreement pages during the virtual ceremony on August 9, 2021.

On August 9, 2021, representatives from NOAA and the Ministry of Earth Sciences (MoES) of India signed an updated partnership agreement that marks more than 12 years of partnership between these nations in the name of ocean and atmospheric observations for improved weather and climate prediction. The virtual signing ceremony included a live demonstration of a new joint oceanographic data portal that makes data from the RAMA-OMNI moored buoy array in the Indian Ocean publicly available for the benefit of global science, forecasting, and disaster preparedness.

“The Indian Ocean is where the monsoon patterns arise that will impact the agriculture and the economic activity of India. But it’s the same basin as well where weather begins that affects North America,” said Craig McLean, NOAA Assistant Administrator for Oceanic and Atmospheric Research. “Our weather in the Americas, the farmlands and what we declare as the production belt of wheat and other crops in the United States - our Midwest - it’s told in advance by understanding what is happening in the Indian Ocean.”

The Research Moored Array for African-Asian-Australian Monsoon Analysis and Prediction (RAMA) was designed to study the Indian Ocean’s role in monsoons, improve monsoon forecasts, and to better study the historically data-sparse Indian Ocean. The first RAMA buoys were deployed by NOAA PMEL in 2004, with the most recent moorings deployed in the Arabian Sea in 2019. MoES has extended operational support to the RAMA array since the earliest deployments. RAMA buoys collect data on a range of atmospheric and oceanic variables, including ocean temperature, salinity, currents, wind, sea level air pressure and humidity. Data collected within RAMA has been extensively used globally and in collaborations between NOAA and MoES scientists to understand the thermohaline structure in the Bay of Bengal, and to validate satellite products and ocean-climate-weather models.

The Ocean Moored Buoys in the Northern Indian Ocean (OMNI) array was initially deployed in 2012, and MoES announced in 2018 that data from the open ocean elements of the OMNI array would be open access and shared freely among researchers to help improve the accuracy of forecasts.

The renewed partnership and joint data portal will significantly benefit the U.S., Indian, and global community working in ocean and climate science, forecasting, and disaster preparedness, especially as we enter the UN Decade of Ocean Science for Sustainable Development and look for new ways to address the climate crisis.