The melting Arctic and Mid-latitude weather patterns: Are they connected? 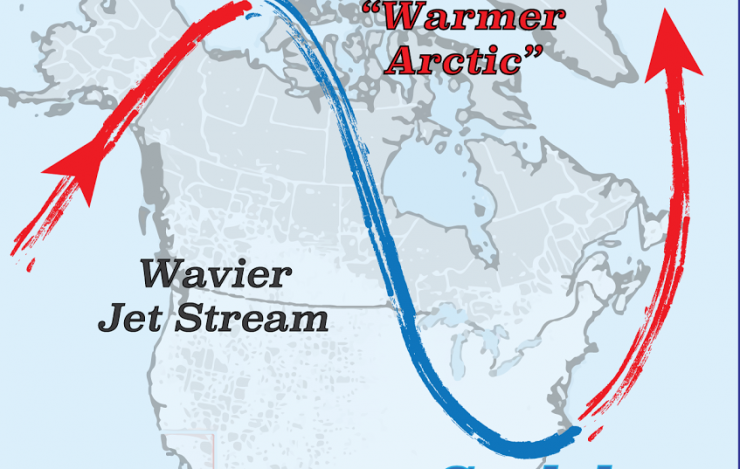 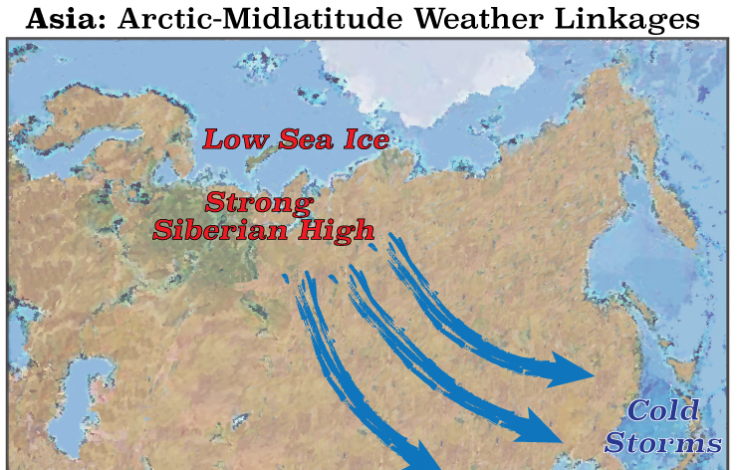 It is too soon to know if recent extreme cold weather such as the last two East Coast winters are linked to Arctic climate warming, according to new research published in the Journal of Climate by James Overland of NOAA, and other authors from North America, Asia and Europe.

“We are in the pre-consensus stage of a theory that there are links between the rapid warming of the Arctic and some severe weather events since 2007,” said Overland, lead author of “The melting Arctic and Mid-latitude weather patterns: Are they connected?”

He added that “new studies on the changing Arctic together with additional Arctic observations will improve our ability to make long-range forecasts for the mid-latitudes, helping millions of people better plan for the future and take steps to be more resilient in the face of severe weather.”

Arctic temperatures are increasing two to three times faster than those at the mid-latitudes. Some scientists have theorized that warming Arctic temperatures and melting ice and snow contribute to weaker upper level westerly winds and a wavier jet stream in some years. This wavier path may be causing cold weather conditions to stall over the eastern seaboard and Midwest United States during recent winters, according to these theories.

It’s still a dotted line from Arctic warming to the destabilized or wavier jet stream and severe cold outbreaks. In the new paper, scientists say that the observations suggesting potential links between Arctic warming and severe weather have not been collected for a long enough period, less than 10 years, to conclude that Arctic warming is a main cause. A combination of forces including tropical energy, varying sea surface temperatures and regional and chaotic effects also play major roles.

The paper shows evidence of Arctic/mid-latitude weather linkages in eastern Asia. Loss of sea ice and warmer temperatures north of central Asia increase the intensity of the Siberian high pressure system. This system, in turn is the source region for cold storms that can reach Japan, South Korea, and parts of China. In contrast a wavier jet stream over North America can have multiple causes, but its intensity can be reinforced by a regionally warm Arctic.

The way to advance these theories from a pre-consensus stage is to increase investigations of the fundamental atmospheric circulation features such as the jet stream that meanders, and the connection between the warmer Arctic and the negative phase of the Arctic Oscillation, an index of the dominant pattern of sea level air pressure in the Arctic.

“We are where other major theories such as plate tectonics and El Niño were before they were accepted,” said Overland. “We need a Grand Science Challenge with more observations and research to advance forecasting abilities. This will help NOAA give communities, both within and outside of the Arctic, the improved information they need to be ready, responsive and resilient to severe weather and long-term environmental change.”