The Wave Glider vehicle is propelled by the purely mechanical conversion of ocean wave energy into forward thrust, independent of wave direction.

Through extensive engineering trials and demonstrations, the Wave Glider’s capability for long-term autonomous operation in the open and coastal oceans has been firmly established and this year’s experiment was the highest latitude science mission accomplished to date with Wave Gliders.

Wave glider is powered by wave and solar energy

Forward motion is created by translating the heave displacement of surface float caused by wave motion into forward motion by articulated fins attached to submerged glider.

Solar panels provide electrical power for command/control and communications and payload electronics. In this low-insolation environment, additional power is provided by lithium batteries in aft payload bay. The hydrodynamic umbilical connecting the float and the fins houses power and data communications cable.

The figure on the right shows the details of the thermistor umbilical of the Arctic wave glider platform developed by Liquid Robotics.

The Arctic wave gliders are capable of conducting autonomous, basin-scale ocean transits providing high resolution temperature data and acting as "virtual moorings” to augment the existing sparse collection of temperature data in the Arctic. Both of these modes of operation were tested during the 2011 mission. 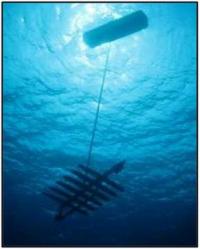