Recent efforts (supported by NOAA’s Climate Program Office) have allowed development of techniques for simultaneously measuring dissolved Sulfur Hexafluoride (SF6) along with CFCs in the same water sample. These techniques are now being used routinely as part of the CLIVAR/GO-SHIP Repeat Hydrography Program.

SF6 concentrations from the North-South transect A16 (2013)

SF6 concentrations from the East-West transect A10 (2011)

In addition to the input from the atmosphere, SF6 has been used as a tracer of diapycnal mixing rates in ocean by deliberately releasing the compound along selected isopycnal surfaces in several major ocean basins.  The bottom maximum seen along the A10 section at about 30°S from 30°W to about 10°W in 2011 is due to a SF6 release experiment in 1996 (Ledwell, et al, 2000).

The SF6 transient in the atmosphere lags that of CFC-12 by about 15 years, providing a new tool to directly compare changes in ventilation rates over this interval. The figure above shows:

(A) Time series of the northern hemisphere surface concentrations (expressed as partial pressure in parts per trillion) of CFC-12 (solid) and SF6 (dashed) in equilibrium with the atmosphere,
(B) The CFC-12 curve is shifted +14 years to demonstrate the similarities of the two curves,
(C) The growth rate of SF6 and CFC-12 (shifted 14 years). 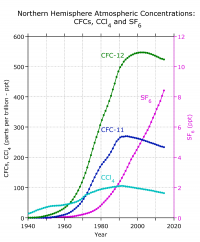 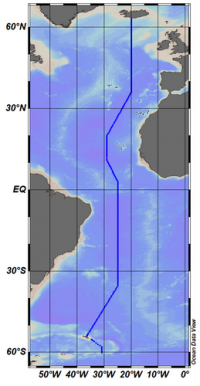