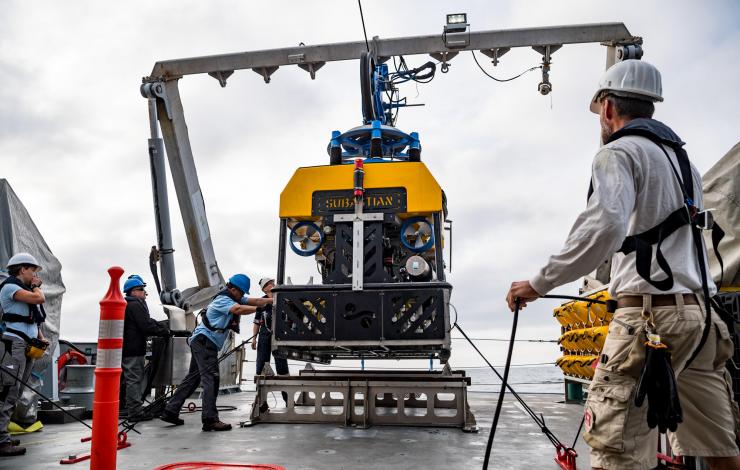 EOI scientist Dr. Tamara Baumberger will be joining an expedition on R/V Falkor, a research vessel operated by the Schmidt Ocean Institute, for an expedition to explore methane seeps on the Cascadia continental margin (off-shore Washington, Oregon, and northern California), June 12-July 3, 2019.  While at sea, text, images, and video updates will be posted to the cruise web site.

Live video from dives with the remotely operated vehicle (ROV) SuBastian will also be available from the Schmidt web site.

Methane is a more potent greenhouse gas than carbon dioxide, but exists at far lower concentrations in the atmosphere. Many think of methane as a free-floating gas so it can be a surprise to learn that nearly one-fifth of the Earth’s methane is stored beneath the ocean’s waters in marine sediments in the form of gas hydrate. Gas hydrate is a frozen form of methane and water that naturally occurs in seafloor sediments at the high pressures and low temperatures that persist near the seafloor at water depths greater than 300-600 meters (~985 to 1970 feet). Continued warming of ocean waters could destabilize these gas hydrate deposits, releasing methane into the surrounding sediments, the overlying water column and possibly even the atmosphere. Because methane traps solar heat in the Earth’s atmosphere far more effectively than carbon dioxide, widespread release of this potent greenhouse gas from degrading marine gas hydrate deposits could be a concern if the seafloor methane emissions reach the atmosphere.

The remotely operated vehicle (ROV) SuBastian will be used to collect samples of gas streaming out of the seafloor at seeps located at different distances from the deformation front, which is where tectonic plates under the eastern Pacific Ocean dive beneath the North American plate. This plate boundary is part of the well-known “Ring of Fire” that surrounds the Pacific Ocean and where earthquakes and volcanic activity occur at plate boundaries. Dr. Tamara Baumberger and her colleagues at NOAA’s Pacific Marine Environmental Laboratory will analyze the gas samples to determine the source of methane feeding the seeps and to look for gases (like helium) that can be a fingerprint for sub-surface fluid circulation that involves rocks deep within this plate boundary zone.