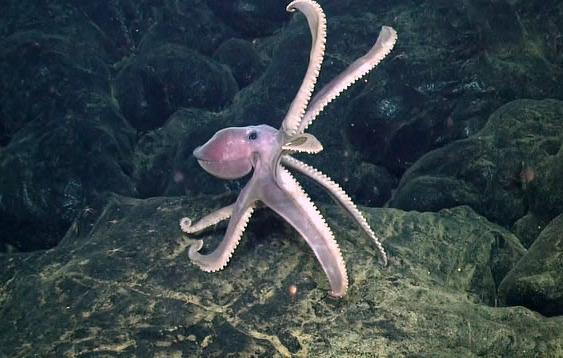 Axial Seamount, 300 miles off the coast of Oregon and 0.7 miles beneath the ocean’s surface, is situated along a mid-ocean ridge where two ocean plates are moving apart. It is the most active submarine volcano in the northeast Pacific Ocean, with documented eruptions in 1998, 2011, and most recently, in 2015. Its activity has been monitored for two decades, since the establishment of the NeMO Seafloor Observatory in 1996, and more recently the launch of the National Science Foundation’s Ocean Observatories Initiative Cabled Array, which provides state-of-the-art monitoring capability with near-real time data streaming from the seafloor. Observations at Axial have revealed important clues about volcanic processes that apply not only to submarine volcanoes but also to land-based volcanoes, which pose a greater risk to life and property.

Scientists from Oregon State University, University of North Carolina at Wilmington, and NOAA’s Pacific Marine Environmental Laboratory successfully forecast the 2015 eruption at Axial Seamount in September 2014, seven months in advance. The forecast was based on a repeated cycle of inflation and deflation of the seafloor, caused by intruding magma. During the 2015 eruption, the seafloor rapidly dropped in excess of 8 feet. The researchers’ analyses of seismic and hydrophone recordings in the months leading up to the eruption also revealed a steady increase in the number of earthquakes.

Additional papers published in Science (Nooner and Chadwick, 2016; Wilcock et al., 2016) offer a close look at these volcanic processes at Axial and their application to land-based volcanoes.