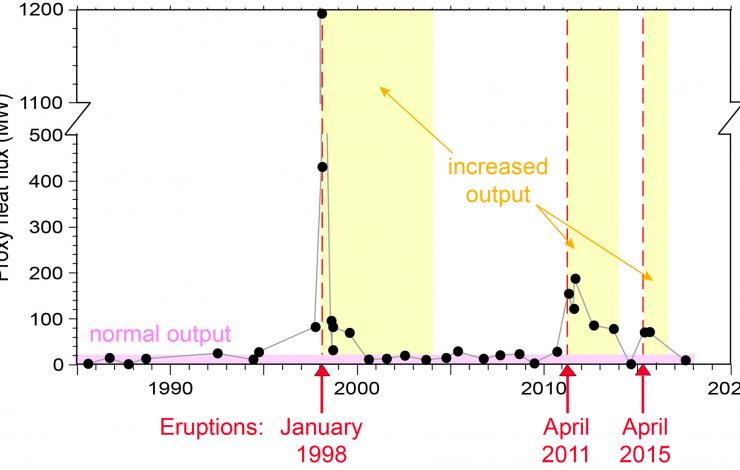 About 80% of volcanic activity on Earth occurs on the deep seafloor of the global ocean. These eruptions are concentrated where the Earth’s tectonic plates collide or separate, accelerating the transfer of heat, chemicals, and microbes from the crust to the ocean through hydrothermal venting (the discharge of high-temperature fluids heated within the Earth’s crust) from the seafloor. A primary obstacle to the advancement of our knowledge of submarine eruptions is that most are undetected by conventional monitoring methods.

In 2015, the National Science Foundation’s Ocean Observatories Initiative completed the installation of a large-scale cabled network on the seafloor off the Washington and Oregon coasts to monitor and observe eruptions as they occur. This network includes instruments at the summit of Axial Seamount. This site, which erupted in 1998, 2011, and 2015, is located about 248 miles off the coast of Washington state and at a depth of nearly 4,600 feet.

For the previous three decades, observations at Axial Seamount were available only from yearly visits by research ships. Gauging the impact of these episodic events on the discharge of hydrothermal vents is challenging. Progress is made as monitoring programs lengthen, but long-term monitoring has been rare. Baker and co-authors describe a unique data set that includes the observation of hydrothermal plumes on the summit of Axial Seamount nearly annually on 30 cruises between 1985 and 2017.

Each cruise measured the height that hydrothermal plumes rose above the seafloor, which indicates the amount of heat energy (also known as heat flux) at the hydrothermal sources. The particle concentration of the plumes was also measured, which helps scientists determine the chemical composition of the vent fluids. These observations provide an integrated view of vent field activity, a view that could not be obtained by individual seafloor measurements. Eruptions produced significant increases in plume rise, particle concentration, and hydrothermal heat flux that lasted 2–5 years after each eruption, and totaled ~10 years over the course of the 33-year observation period. The increased heat flux was about 6 times greater during the post-eruption periods than for periods not affected by an eruption. Because measurements of hydrothermal fluxes are most commonly made during periods of volcanic inactivity, previous estimates have likely underestimated how much volcanic heat and chemicals are transferred to the ocean by active submarine volcanoes.